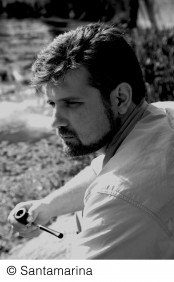 Francisco Narla (Lugo, 1978) is a writer and airline captain. In spite of his youth, he has already established an extensive literary career, and dared to try out many different genres. He has published novels, stories, poetry, essays and practical books, the latter being closely linked to his profession, but also his interests. A man with many facets, Francisco Narla is also a public speaker. He has spoken in various forums such as universities and radio and television programs. In 2009 he published his first novel, Los lobos del centeno, which, after its success in Spain, was published in Mexico for sale throughout Latin America. Caja negra, his second work of fiction, was released in November 2010. Assuris his third and most personal fictional project... to date. The next year he presented Ronin, which established him as one of the most versatile and talented historical novel writers in Spain. Where the Hills Howl is his most personal work yet, a brilliant new chapter in his career.